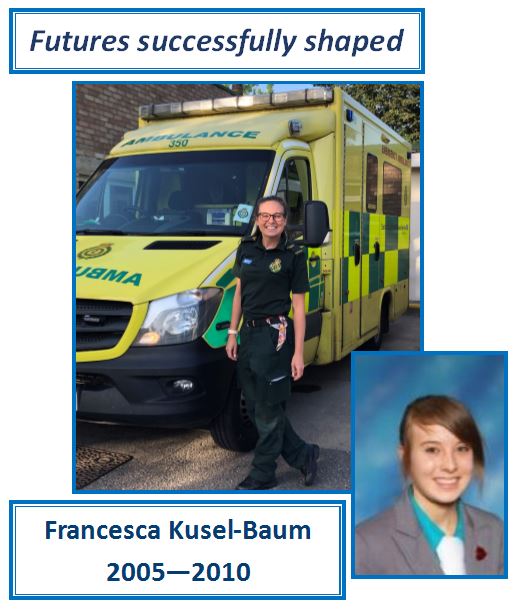 When I started at MHS I came away from my home town to attend a better school, to get a better education and better chances in life – so my mum always told me. But there was a very small group from my local town of Harwich and about 5 or 6 from my primary school, none of which were particularly close friends of mine. On my first day I met the amazing Mr Baxter and he told us that it was his first day as well. I was instantly put at ease knowing that, if teachers had first days without their friends, it wouldn’t be so bad for us either!
Whilst at Manningtree I became more and more involved with the music department, joining in as many clubs as I could.  Mr Firth was my music teacher; I took part in intermediate band, concert band, clarinet ensemble, choir and chamber choir. They were all so much fun and a such a great way to make friends, which I did almost instantly. My favourite part of the school calendar was the sponsored walk, it has shown me how it is possible to raise enormous amounts of money if a big group of people participate, which has inspired me to continue volunteering and raising money for charity.
Some of my favourite subjects were English with Mr Jones, French with Mr Mason and  history with Miss Halls. I took French, history and music as my GCSE options with no idea what I would want to do when I was ‘grown up’. As part of history we did a trip to the battlefields in Belgium and France and we made a special stop so I could visit the grave of my family member who was killed in Arras, a very emotional and humbling day. Whilst I really enjoyed learning about history, Miss Halls highlighted to me that I was more interested in the social aspect than others after I wanted to learn more about the effects war had on ‘normal people’.
After MHS I went to the Sixth Form College in Colchester, and I did my A-Levels in sociology – Thank you Miss Halls, English Literature – Mr Jones inspired me here, performance studies – which I think can easily be dedicated to my time in the music department. The subject I enjoyed the most at sixth form was sociology and so when the time came I applied for uni, still having no idea what I wanted to do, I applied to do sociology.
Whilst at university I did an RLNI Pool Lifeguard course and became completely inspired that I could ‘save someone’s life’. But thankfully was not given the chance to do so whilst working as a Pool Lifeguard!
I graduated from the University of Roehampton in 2015 with a BSc in Sociology. At this point I still had no idea what I wanted to do when I was ‘grown up’. A fellow lifeguard friend sent me a job application for the role of student Paramedic for the  ambulance service, which I filled in, thinking – ‘what could I lose?’. I got the job and whilst working front line for the ambulance service, I completed a series of courses and have just recently qualified as a Paramedic. Thankfully, I have now had plenty of opportunities to save lives and have managed to do so very successfully. To have become a Paramedic, I always thought that I needed to have chosen science subjects at GCSE, A-level and then complete a specific university degree. I thought I had foregone that opportunity because of choices I had made earlier in life. But that just wasn’t the case.
I have just left education for the first time since I was 3 years old and now I can’t wait to return. My advice to anyone who doesn’t know what they want to do is to just keep learning and gain qualifications for things that you enjoy and the rest will just fall into place. It certainly never occurred to me that having only chosen the basic science options at GCSE, I could still go on to become a Doctor? That’s what I’m aiming for next.