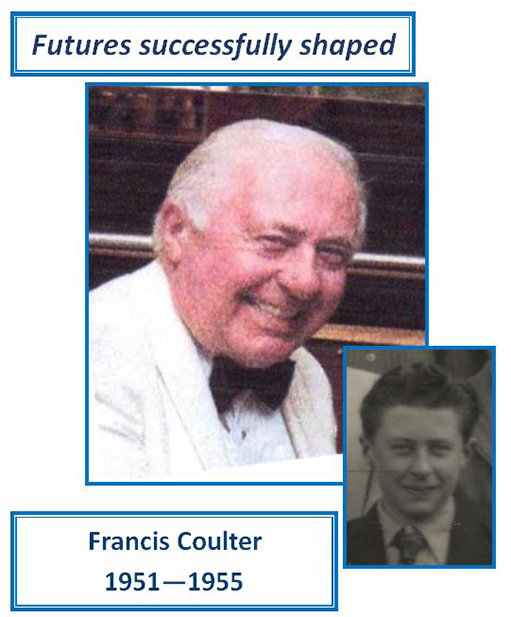 I was educated at the Manningtree Secondary School (as it was called then) from 1951 – 1955, the teachers were fine and the lessons were varied and interesting. It was a first class experience and I enjoyed my time at the school.
My grateful thanks goes to Manningtree School, for the guidance and encouragement that was provided, which shaped my career and inspired me to do well.
My favourite subjects were English and music, it became apparent at an early stage that I had a passion for writing, this was encouraged by Mrs Brunning – the English teacher who guided me through the technical aspects of good writing, especially with structure and especially punctuation which was very useful to me later in my career.
Whilst at the school I was also having private piano lessons so I was naturally interested in music lessons given by Mr Cole, in addition to the piano I also played the violin in the school string quartet. One of the highlights I remember from the school was a visit by a pianist who gave a grand piano performance of ‘Chopin’s Polonaise’, I was so inspired by the performance that I increased my piano practice in the hopes that one day I would be performing on a grand piano just like that.
I left the school in 1955 and began work as a printer with BX Plastics.
After a few years I went on to obtain employment as a Publicity Director with a subsidiary of S A Armstrong of Toronto Canada, one of my major achievement here was in producing publicity material in Arabic which resulted in massive  orders for the company from the Middle East.
I went on to become a NUJ Journalist, and also a member of The Federation of International Journalists dealing in Middle Eastern affairs. This involved publicity for the King Faisal Foundation in Saudi Arabia with related Islamic Art projects.
My final employment was with an Investment group in London consisting of  seven large companies and I held the position of Marketing and Publicity Manager, one of the companies was involved in publishing within the music industry. The work involved  promotional material for top performers in the music business at that time which included, – ‘Kylie Minogue’, ‘Jason Donovan’, ‘The Spice Girls’, ‘Terence Trent Darby’, ‘Michael Jackson’, ‘Madonna’ and ‘New Kids on the Block’ during their UK tour.
When I retired from working in London I returned to playing the piano as a hobby, however, I received so many requests to play the piano that it developed into a full time business. This led to a five year contract at a 4 star hotel and resort in the UK where I played a concert grand piano which was valued at £72,000!
I also entertained to large International audiences in 4/5 star hotels in Spain and the Canary Islands – so, I did realise my dream of  playing a grand piano before an audience!