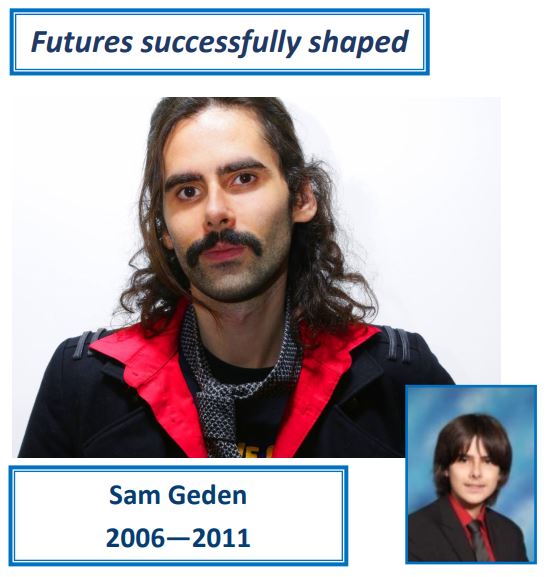 What can be said about my time at Manningtree High School? To have high‐functioning autism at a time when it wasn’t so understood made the whole experience tricky, and so was having baggage with depression, anxiety and body dysmorphia. It was clear from literally the first day that I was something of an outcast. So, doing what an outsider looking in typically does, I fashioned myself as the eccentric and theatrical person in the group.
That didn’t work, of course, and I became ‘the weird kid;’ pushed into walls; in the mud and shouted at every time I walked through the hall. I missed classes, which earned me the nickname ‘invalid,’ and most days I felt hopelessly alone – and it wasn’t helped that Facebook was blowing up then, letting the abuse bleed into home too. It really never ended.
There are fragments of good memories, though… sacrificial gummi bears in Chemistry; the golden age of the Steps Crew, and the shrinking handful of people who actually cared; the History trip to Belgium where I found the grave of my great‐great‐grandfather… Going to New York and falling in love with that city (I would return there some years later at the invitation of the Michael Jackson Estate)…Halcyon days in English finding my voice thanks to the wisdom of Mr. Jones who, along with Mrs. Minter, Mr. Moreton and Ms. Hughes, understood my quirks when few others did.
But what happened after? College was a dud and I left with only one A‐Level to my name. I wandered around for a couple of years, trying to figure out who I am… I met some people, wrote some things, the usual Bohemian shtick… Eventually I went to the University of Essex via an Open University qualification, which is where I found my footing. I made a few short films; published short stories and poetry in anthologies; acted in other short films; became the President of a Society that I led to a Gold Standard… And that’s just the undergrad stuff! I graduated with a BA in Film and Creative Writing in July 2019 and am finishing up my MA. There’s a bunch of other stuff too, but it’s too much to fit onto this bit of paper.
It’s a universal truth during the war of adolescence that being noticeably different brings a cavalcade of hassle your way: every school has this. Navigating school is hellish because you’re still trying to figure out who you are and, honestly, you still don’t really know when you leave here. Life depends on adaptability, and that’s what we learn in school as we get closer to the version of ourselves we’ll eventually be. Without the adversity I endured, I wouldn’t work as hard as I have to get where I am, or have as much depth of gratitude for when things do go right… Without the compassion of my teachers and friends, I wouldn’t hope that things could get better.
And they do – I still struggle to believe it, but it’s true. It’s the hour hand of a clock: even if you can’t see it happening, it’s slowly, meaningfully getting there. You’ll learn that what other people think, especially hyenas laughing at your Otherness, really doesn’t matter. That realisaton takes time, especially when you feel the vultures circling around you and about to descend, but when you do, you’ll be so much better for it as you leave them, their pettiness and immaturity behind. If a
chronically‐depressed, autistic and body‐dysmorphic idiot can make it past all that and be reasonably successful – trust me, you can too. It’s never forever.